Fresh fish from Brittany, Label Rouge chickens and a dazzling selection of fine cheeses hailing from different regions across France used to be the big selling points of French fine dining in Shanghai.

But COVID-19 pandemic happened, which greatly affected the global supply chain of imported products, especially fresh produce, meat and seafood. Not only are the prices much higher, but also more risk factors are involved.

Now on the menus of many fine dining French restaurants, guests are seeing more Chinese cities and regions, such as scallops from Dalian, Liaoning Province, or chickens from Guangdong Province. And local customers are embracing the new changes with an open mind — many of the top fine dining restaurants in Shanghai have been doing better than in previous years since China’s speedy recovery from the pandemic.

This week, three French chefs in Shanghai share their stories of how they transitioned to using a majority of local Chinese ingredients in their menus. 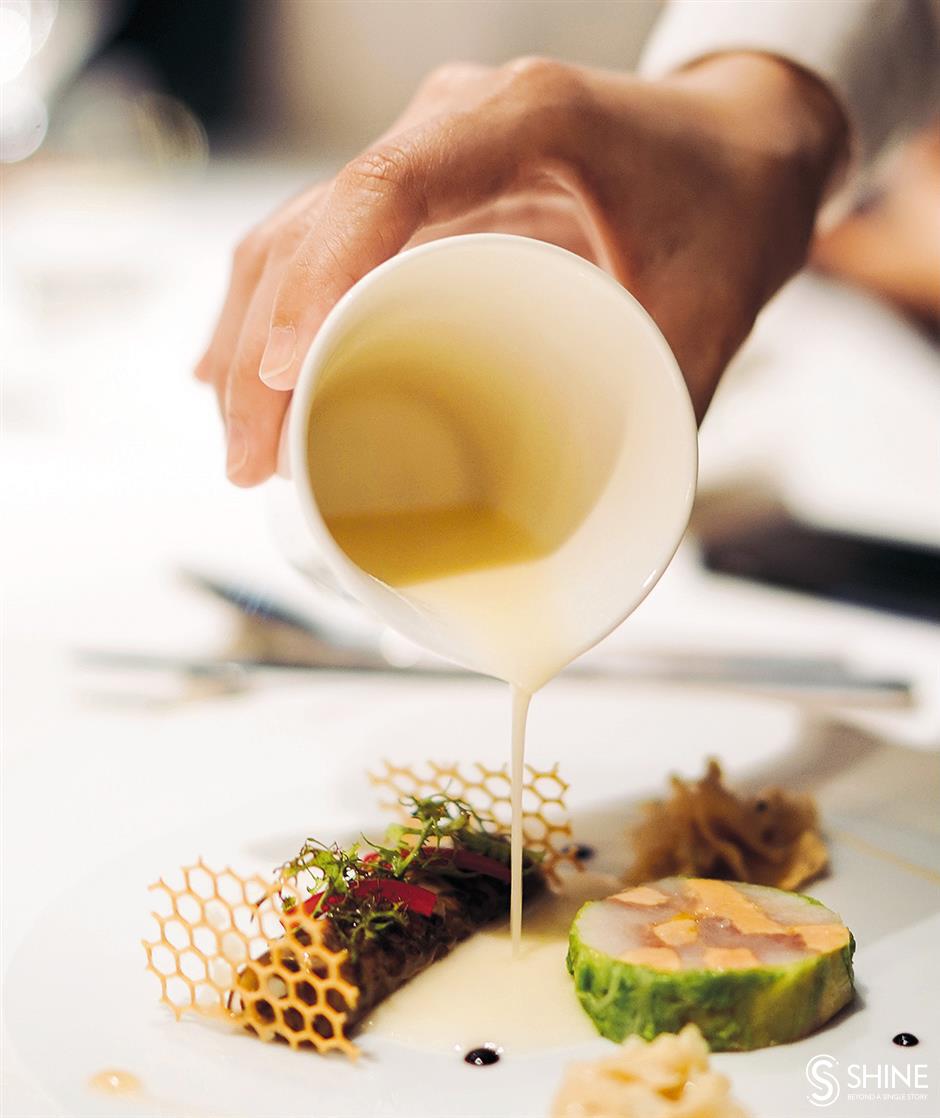 “It’s not an obligation to work with French ingredients in French cuisine today,” said Yann Klein.

“In life, you don’t say many times that you did the right thing, but today I can say that I did the right thing,” said Yann Klein, executive chef of the one-Michelin-star restaurant Maison Lameloise, on making the change to using mostly Chinese produced and sourced ingredients since the COVID-19 pandemic in early 2020.

When Klein and his team opened the restaurant in 2018 on the 68th floor of the tallest skyscraper in Shanghai, they were using 20 to 30 percent local ingredients, mostly fresh fruit and vegetables.

“We come from France, I’ve been working in the kitchen since the age of 15, though I worked in Switzerland but we always had the same ingredients: fish from Brittany, lamb from southwest of France, beef from Charolles, we always used French fish and French ingredients,” the chef explained. “We came to China in a discreet way. For five months in Shanghai, nobody knew who we were working for, and we didn’t know the country, the culture and the food.”

So they took the recipes that worked best in France, the stable recipes that have good structure and good balance. Localization was a step-by-step strategy for the restaurant. Each year the chef tried to incorporate something local and new into the menu, as he worked with around 25 suppliers who brought in produce and catches every season.

The owner of the restaurant also wanted the chef to try notable Chinese ingredients such as yellow croaker, which can be very pricy. For the French chef, it was a mix between sea bass and grouper, and getting to know unique Chinese ingredients was a long learning process for chefs of Western cuisine. 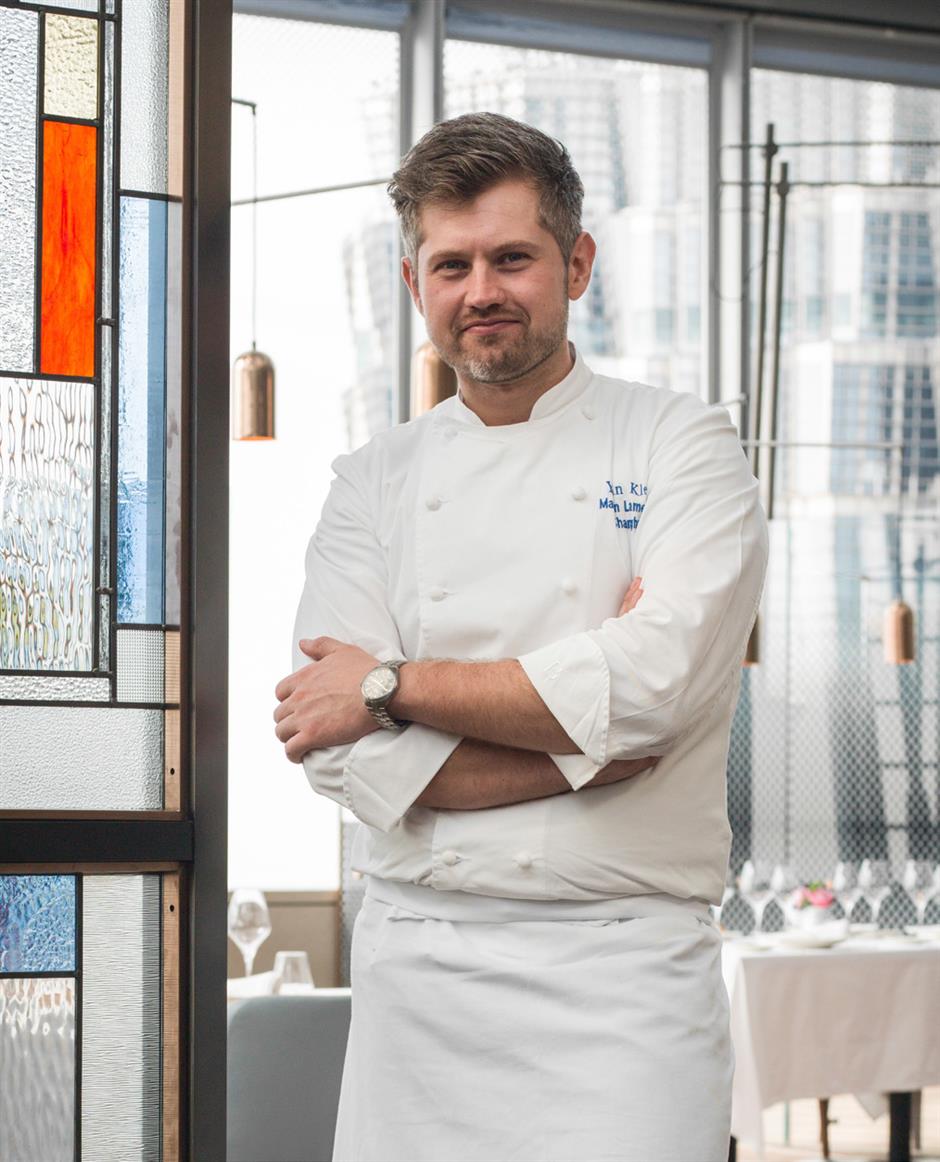 But the COVID-19 pandemic happened. In February 2020, Klein started to receive the price of the fish from France, and it was so expensive with limited flights (and more complicated logistics) that he decided a big change was necessary.

“For a few weeks we were closed, we were wondering how we were going to open again, are we going to open again, for me I was very scared, and I started to see restaurants closing, the business was very low,” he remembered. “We were speaking to the chefs in France about how we should rethink our way of cooking, we needed to rethink the model of the restaurant, if we don’t do anything, it’s quickly going to be the end .”

“I remember when I was still working with my French supplier, they sent me pictures of the fish they were sending to China, which are caught at 6 am, boxed at 8am and arrive in Shanghai next day, and you imagine the amount of money and CO2 involved in the process, is it really what we needed? I don’t think so,” he said.

The restaurant’s local experiment has since become more innovative. Klein’s latest winter menu features at least 70 percent of Chinese ingredients. Guests are surprised with dishes made of signature Chinese ingredients such as yellow croaker, sunflower chicken (a unique variety from Guangdong), Yunnan ham, even sea cucumber like a “bourguignon” — stuffed with duck and foie gras, braised in red wine and smoked, with a garnish of burgundy stew.

And the French kitchen learned the proper way of reconstituting dried sea cucumber from the neighboring Chinese restaurant, which is a long and meticulous process.

“We really wanted to show that we made a big turn in our way of cooking, and today I’m happy that we did it, all the customers are happy, too,” he said.

“It’s not an obligation to work with French ingredients in French cuisine today.” 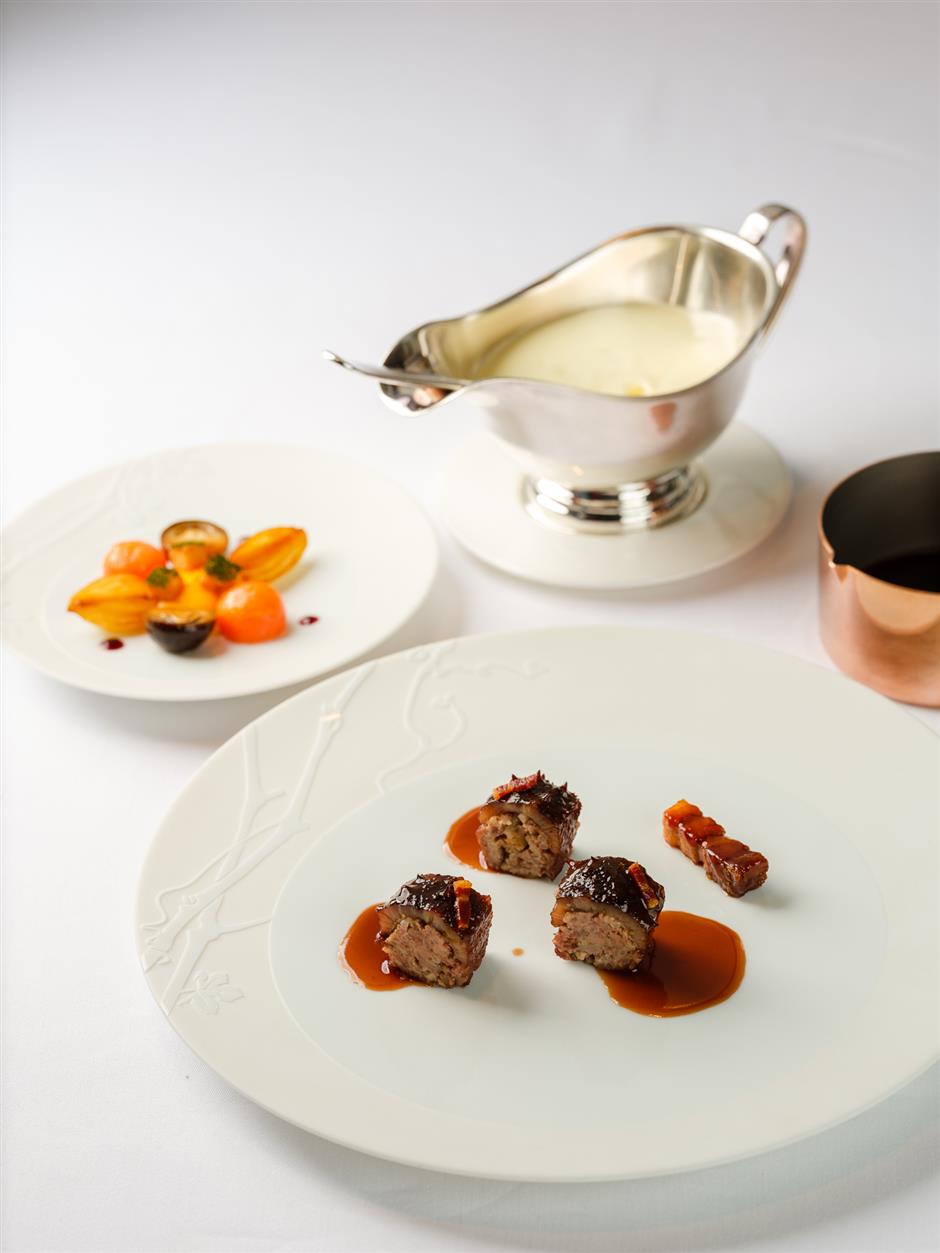 Sea cucumber like a “bourguignon” — stuffed with duck and foie gras, braised in red wine and smoked, with a garnish of burgundy stew.

“The suppliers are more interested now than before to source locally,” said Romain Chapel, executive chef of Capella Shanghai who heads the kitchen of one-Michelin-star French cuisine restaurant Le Comptoir de Pierre Gagnaire and is a protégé of renowned French chef Pierre Gagnaire.

About 80 percent of the raw ingredients used by the restaurant for the current menu are produced and sourced in China, including seafood, meat, fish and vegetables, but Chapel didn’t reach such a high proportion because of the influence of COVID-19, he was already using 60 percent local ingredients when the restaurant first opened in 2017.

“In the beginning, I didn’t have the opportunity to find some local substitutes of fish, I was using some local seafood and fish, and now I have more opportunities to go deeper and replace nearly everything,” he said.

The COVID-19 pandemic didn’t bring many changes for Chapel and the restaurant, as the localization effort was already ongoing.

“It’s about doing the cuisine with what I’m capable of sourcing, what suppliers can offer and what I can find when I travel around China, it’s an ongoing process,” said Chapel. “The more time I spend in China, the more experience I get. It can be easily during my personal time when I’m outside the restaurant, walking around and going to markets and getting close to local ingredients.” 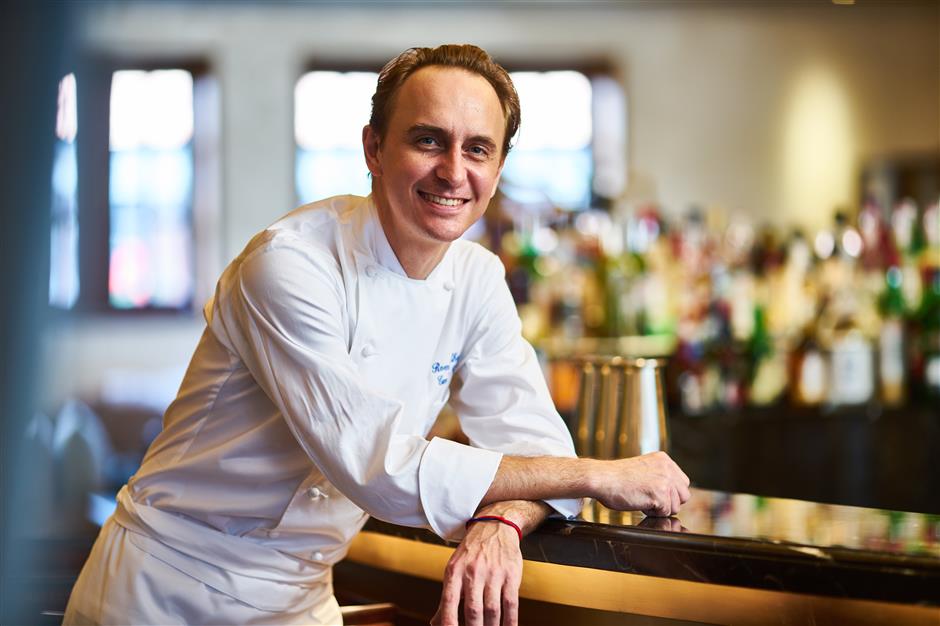 Romain Chapel has been using local ingredients since the restaurant opened four years ago.

Chapel uses fresh, live scallops from Dalian since the opening of the restaurant, the same variety as those from Hokkaido, and he now uses fresh sea bass and sea bream from the same Chinese city. And when sourcing ingredients, he emphasizes freshness, quality of the meat and does the product reflect what it is — imported or local, it should be appropriate.

He noted that maybe imported products were looking more appealing or attractive to customers a few years ago, now people are starting to look at the quality. He’s happy to see local products being recognized more by people, and working with local fishermen also makes more sense.

But for the chef, the priority is still about using ingredients that are necessary for the recipes, not just where they come from, so he needs to use French cheeses for their specific flavor, as well as imported duck liver.

“Some substitutes cannot always be found, we’re still proposing diversity, but as a European restaurant, we need some products to be imported,” said Chapel.

“China is maybe one of the most diverse countries in terms of food materials, boasting many possibilities, the thing is how to select (the products) and find partnerships that are interested in the endeavor, it may take a few more years to solve more challenges,” he said. 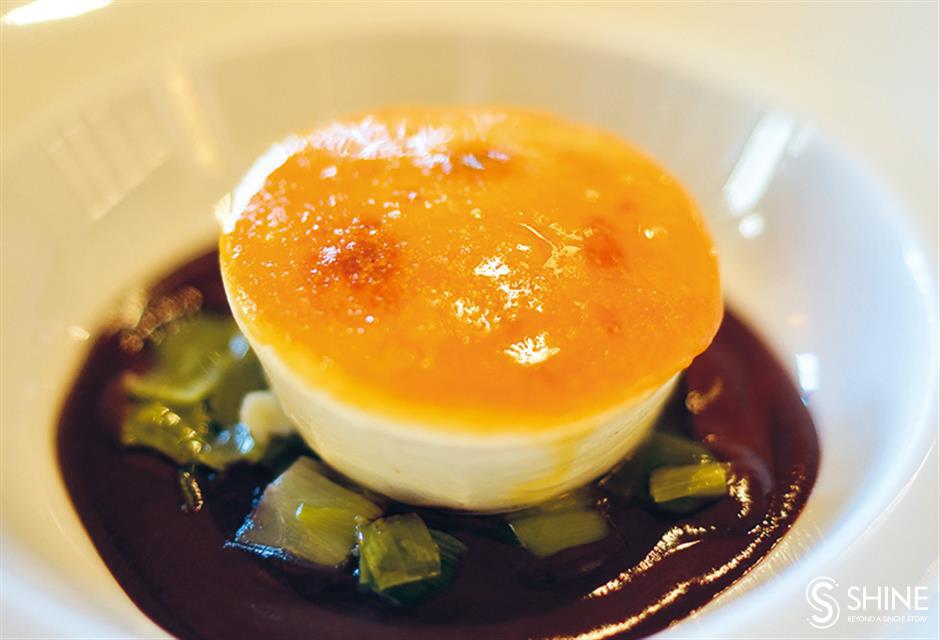 Scallop soufflé made with fresh scallops from Dalian, Liaoning Province.

“With COVID-19, we need to reinvent ourselves and adapt, it’s a perfect time to source local Chinese produce. Every place has beauty and particularity, so now we focus more on the local ingredients,” said Olivier Pistre, executive chef of Pudong Shangri-La, East Shanghai who runs the kitchen of French restaurant Jade on 36.

The menu of Jade on 36 now uses 75 percent ingredients produced and sourced in China, a 15 percent jump compare to 2019, which isn’t as huge as some other restaurants before and post COVID-19.

Besides vegetables that are all local, Pistre uses pigeon from Yunnan, lamb from Ningxia Hui Autonomous Region and local duck liver. The challenge Pistre faces now is to find local fish to replace the imported varieties he uses for his recipes, not only emphasizing quality, but regularity, as suppliers must deliver consistent products of the same standard. 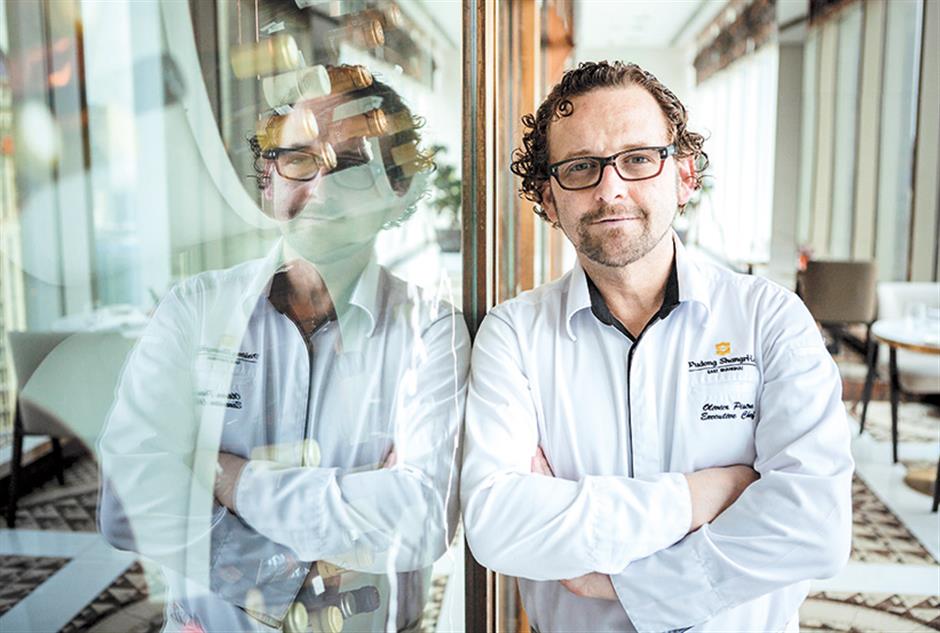 For chefs, price and logistics are main factors for sure, but not the only motivations to go local on the menus. Ingredients must work with their recipes, and that’s why different chefs are using different types of local ingredients. One restaurant may use local chicken and still be using imported duck liver, while the other can go for the local duck liver but use imported chicken.

Pistre enjoys visiting the local fresh markets to learn about local ingredients and find inspiration for his new dishes.

“You can feel a lot of similarities between French and Chinese cuisines in terms of cooking techniques and using unique ingredients,” he said. 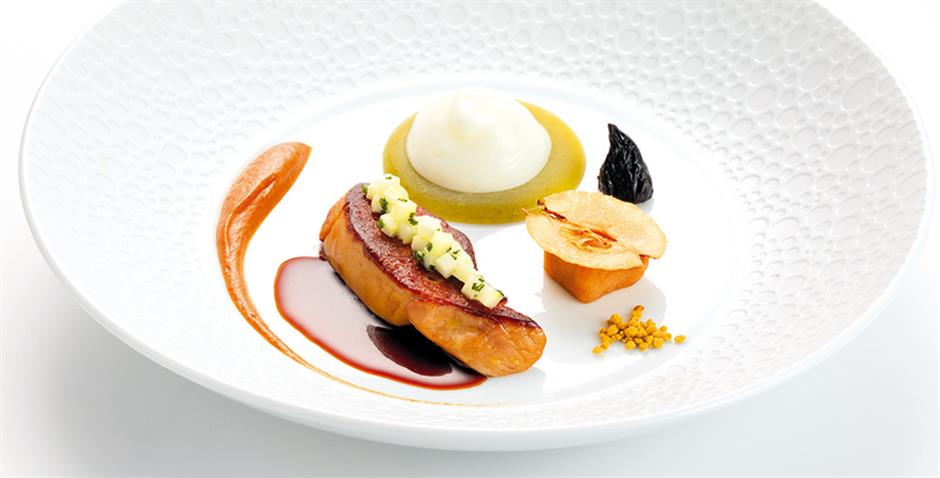 Though China’s culinary culture is vastly different from Western cuisine, driven by growing market demand and people’s elevated tastes, China is producing more high-quality ingredients, including Western foods that are staples of a luxury lifestyle.

China is now the world’s largest caviar producer, with most of its farms in the provinces of Zhejiang, Yunnan and Sichuan. In 2016, China’s production accounted for more than 80 percent of the global total, according to data released by the European Market Observatory for Fisheries and Aquaculture research, an online tool developed by the European Commission.

Truffles and coffee from Yunnan are also becoming more prominent internationally, as the quality has been improving year by year.

European cheeses are hard to replace, as they not only emphasize the quality of the ingredients but also the craftsmanship, though there are Chinese artisan cheese makers who are trying to produce cheeses locally.

Klein has added a few special cheeses from Le Fromager de Pekin, a cheese store opened by Liu Yang in Beijing that makes local cheese with local milk, to the restaurant’s cheese selection.

However, some chefs, including Pistre, are now experimenting with premium lamb from Ningxia Hui Autonomous Region that’s showing very good results when cooked in French recipes.

But for restaurants of Western cuisine, pantry items including flour, oil and chocolate still need to be imported, as there are no local alternatives so far. French flour, for example, is milled according to different standards and French bread and pastry recipes cannot be achieved successfully with Chinese flour.

Not all restaurants are carrying out ingredient localization in such an accelerated or even aggressive fashion. International logistics have definitely become more expensive under the influence of COVID-19, but imports haven’t been halted and fresh ingredients are still arriving in good time, and there are restaurants keeping the proportion of local ingredients at 20 to 30 percent depending on the chefs’ styles of cooking and requirements for their recipes.

What is the difference between simple and complex carbohydrates?

Crucial vitamins and minerals for children